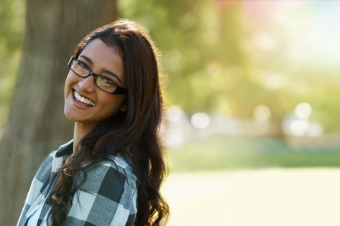 Invisalign is a series of clear plastic orthodontic aligners that straighten your teeth over a period of months. Invisalign has also designed a line specifically for teenagers. Here, our Surrey dentist explain what makes Invisalign Teen a great choice for adolescent patients.

What is Invisalign, and how does it work?

Invisalign is a series of removable, clear plastic aligners. Each aligner in the series is worn for around two weeks, after which it is switched out for the next aligner.

Each aligner is slightly different from the last, and has been custom made to fit into its position in the lineup. Each aligner is responsible for a small adjustment to the position of your teeth, until treatment is finished and your teeth have been moved into their new, straightened positions.

Because the aligners are made of clear plastic, they are almost invisible when worn, making them ideal for teenagers and adults who have concerns about aesthetics and don’t like the look of traditional metal braces.

And since the aligners are also removable, they can be taken out to eat, and to brush and floss. This alows you to continue these normal daily routines as you always have.

So what makes Invisalign Teen different?

Invisalign Teen features a few differences from standard Invisalign treatment. These features were developed with the typical busy teenager in mind, to make it easier for them remain compliant with their treatment, and to accomodate their growing smiles.

Invisalign Teen is the same as standard Invisalign in all the basics, and in terms of quality and effectiveness. In addition, though, it includes the following additional features:

Invisalign Teen aligners have small blue dots that fade away after two weeks of consistent wear. How does this help teens? The fact is that on average, teenage patients tend to be less compliant to their prescribed treatment than adults. This means they are likelier to take their aligners our more often and for longer periods than prescribed. Because of this, it can be more difficult for them to keep track of how much longer they need to wear a given set of aligners.

The compliance indicators will only fade after the aligners have been worn for two full weeks required, so it's easier for teens to get back on track with their orthodontic treatment.

Invisalign teen can be prescribed for teens whose adult teeth are not quite finished growing in. This is thanks to the addition of special eruption tabs. These eruption tabs are essentially spaces in the Invisalign Teen aligners that allow the teeth to erupt through.

Teens are also more likely to misplace or damage their aligners during treatment, partly because they're more likely to take them out more often, and leave them out for longer. For this reason, an Invisalign Teen series comes with 6 replacement aligners so that treatment can stay on track.

As a Straight Smile Centres Member Practice, you can count on our general dentists to help you achieve the straight, even smile you've been dreaming of.