What is the difference between snoring and sleep apnea? 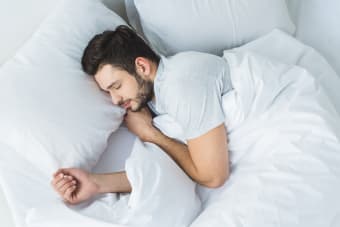 While snoring is a common symptom of sleep apnea, not all people who snore have sleep apnea. Also, not all sleep apnea patients snore. Our Surrey dentists offer some insights into sleep apnea and snoring.

Both sleep apnea and snoring disrupt our natural sleep patterns. For those who suffer with the impact of poor quality of sleep, every day is a battleground. However, not all snoring is related to sleep apnea.

Frequent, abnormal pauses in breathing may occur while you sleep. Depending on which type of sleep apnea a patient has, this serious sleep disorder and medical issue is marked by a physical obstruction of airflow, lack of respiratory effort, or a combination in both that cause breathing to pause.

Snoring occurs when airflow is blocked. This causes vibrations in a patient’s respiratory structures, producing the sound we (and most likely anyone who’s sleeping next to or near us) recognize as snoring. It’s true that snoring may also happen for reasons unrelated to sleep apnea, such as nasal obstructions, an elongated soft palate, or an unusually long tongue.

Obstructive sleep apnea (OSA) can also result in snoring, though not every patient who suffers from sleep apnea snores.

This is the most common form of sleep apnea, and it’s caused by physical blockage of airflow. While people may not know they are suffering from this condition, their sleep partner will often be the first to spot symptoms.

Sleep apnea suffers may feel sleepy and fatigued throughout the day after nights of poor quality of sleep. As you may imagine, chronic fatigue can have a drastically detrimental effect on our work performance, general alertness, mental health, relationships and general alertness.

Sleep apnea is a serious condition that requires effective intervention. Contact your Surrey dentist today. We may be able to help you get a better night's sleep.